The meat of the fish is long gone.
Its smiling bones intersect with the back of a chair,
laid out pat, one more rung in a stack
and the velvety cats can’t leave it alone.

There’s no word for this in the language of cat,
this pawing furore, vertiginous spitting,
cats here then there, then not here and not there,
a hair’s breadth between them and their skeleton love.

Tails, bones, chair, paw, they are spinning and the picture is
spinning, as they hiss in their fit, little beasts,
wild for the flesh of it, leaping in tempera strokes,
implacable button-blue eyes driven so strong
they could lick the egg-yolk from the paint they’re made from.

There is no implied narrative from which to draw out a poem in Craxton’s ‘Cretan Cats’, no human figure from which to conjure a character, not even a landscape to walk the mind through. It suggests nothing very complicated about the artist’s state of mind. It’s just an interplay of hexagonal tiles, a slatted chair, fishbones and a tangled circle of two black cats, all legs and tails and arched backs.

A painting so purely engaged in the pleasures of its own visual qualities might seem to have limited possibilities for exploration in a poem. For much of Craxton’s career, his evident delight in surface, in pattern, colour and the play of Mediterranean sunshine, was considered to have limited possibilities even as painting (‘a hint of the best type of Chelsea restaurant mural’, in one critical put-down that memorably combined spite with snobbery). Craxton had left England in the late 1940s, eventually making his home in Crete, and his postwar paintings sing with the pleasures of the South in glowing yellows, radiant blues, sunbaked greens and ochres. Craxton found his visual language in the clarity of light and sparse landscapes of Crete: ‘Don’t expect to find any perspective in and around the Aegean’, he wrote. Instead, ‘a complicated movement of lines ... dances with a static movement. ... The moment caught from right inside of the form and held with an internal and external pressure.’ Which sounds very like what happens in a poem.

Claudine Toutoungi’s ‘Cats Breakfasting’ is a beautifully lucid and subtle response to this inner structure of Craxton’s work, a poem that both sends the reader to the painting with opened eyes, and is totally of itself, needing no supporting illustration – ‘held with an internal and external pressure’. It is a compellingly visual (and tactile) poem – ‘velvety cats’ have ‘button-blue eyes’, ‘smiling bones’ ‘intersect with the back of a chair, / ... one more rung in a stack’. This is exact and restrained, achieving the illusion of transparency – yes, we can see that configuration of ‘tails, bones, chair, paw’ erupting into a spinning, hissing knot of ‘little beasts’, a ‘pawing furore’ of cats that thread and roll and jump through Toutoungi’s precise lines, a static dance circling around the poem’s midpoint: ‘ cats here and there, then...’.

Then look more closely, and it slips away, like a magic eye image when your stare goes out of focus. That spinning knot isn’t cats: ‘the picture is spinning’ (my italics). Toutoungi has changed everything – we’re spinning, too now, back to the beginning to look again at what we thought we were seeing. ‘The meat of the fish is long gone’, the poem opens: a succession of now-you see-it-now-you-don’t images. The cats are ‘here, then there, then not here and not there’. What did we expect? Real cats?

The poem’s last line explicitly draws us back towards Craxton’s painting, reminding us that these cats are dabs of colour on canvas, and now words on a page. They ‘could lick the egg-yolk from the paint they’re made from’. Craxton painted in egg tempera, but even as Toutoungi dissolves the cats into paint, her poem returns them to us in all their ferocious appetite for life, ‘wild for the flesh of it’, for the nourishing richness of meat, fish, egg yolk, for button-blue and golden yellow. The spinning cats will always be there, always in the moment of leaping out of sight. Claudine Toutoungi makes us see what it is like to look; what art – the poet’s and the painter’s – can do.

Judith Willson
Posted by EJ at 12:00 No comments:

Click here to listen to a podcast of the NPVI launch at the London Review Bookshop, featuring Jee Leong Koh, Rebecca Watts, Joey Connolly, Vahni Capildeo and John Clegg!
Posted by EJ at 12:00 No comments:

Lesley Saunders on finishing a poem

One conundrum that I seem to face quite often in reaching the final version of a poem is finding a balance between two opposing principles: on the one hand to follow the very sound advice not to patronise one’s readers – for example, by using up precious space in a poem to provide information which a reader (especially a reader conversant with poetry) either already knows or can reasonably be expected to guess; and sometimes the information is trivial anyway, not integral to the real gist of the poem.

On the other hand, it’s important not unwittingly to baffle or distance readers whose cultural backgrounds may be very different from one’s own. Glancing references and allusions that seem self-evident to a writer could smack of esotericism or even elitism to some of her readers, and result in that layeredness of meaning in poetry – the past brought to bear on the present, the historical or mythical on the personal – being lost.

I feel particularly anxious about this because my love of ancient Greek and Roman literature means I’m still strongly drawn to those bottomlessly rich resources of myth and legend, and want to revivify and reinterpret their power and passion for myself. Once upon a time, it was probably the case that most readers of poetry in English knew who Hector, Tiresias, Hannibal, Agricola were and what they did (to take just a few of the heroes and villains I’ve recently written about). But I’ve realised, from friends’ reactions to drafts, that I can’t take that for granted – any more than I can be sure of recognising the mythical and historical figures inhabiting the work of, say, Shara McCallum, Daljit Nigra, Vahni Capildeo…

Solutions I’ve adopted for individual poems include appending a brief epigraph as context (as in ‘Landfall’, ‘Olfactory’, ‘Army Musician’, ‘Particulare Care’), or, more rarely, adding an explanatory footnote;  in one or two of my poetry collections, I’ve included several pages of notes at the end, which readers can ignore or peruse as they choose. But yes, I know it’s all a bit Waste Land-ish, that notes look off-putting in themselves, too academic and recherché for the spontaneous, inspirational nature of poetry…

Perhaps some poets hope or expect readers will use internet search engines to track down references, though this presumes a considerable degree of readerly commitment, as well as the risk (discussed by Henry King in his New Poetries blogpost in 2011) of ‘letting information stand in for understanding’.

It’s easier at readings and performances, when I can slip in a crucial piece of background during my preamble, or else check with the audience whether more context would be helpful.

David Troupes on place in his poems

Thinking is a situated activity. Knowledge of myself and knowledge of my surroundings are inextricable. Maybe this is why so many of my poems are situated in specific, named places: the way I felt, the way I thought, when I was there, in that place and time, cannot be separated from the place itself. And even though the poem I write is of course not a record of my thinking on that past occasion, but a record of my thinking over the memory months or years later, still the attempt to re-enter my own past head must begin with a mental return to that place, a summoning-back, as nearly as I can, of how it felt to think and to be there – wherever there happens to be.

Hence the several place-name titles in my New Poetries VI pieces, including ‘Swimming at Ovens Mouth’, ‘Swimming the Deerfield at Stillwater’ and ‘Echo Lake’.

In visiting these memories to make poetry, however, I’m very aware of the risk of producing something which excludes the reader. This risk is a part of all art, of course – even the most fictive poem may still indulge the writer’s private emotions and beg its wider concern from the reader – but the problem seems especially acute with memory poems written about named places. They can have a postcard quality of ‘wish you were here!’ self-delight.

My first strategy for avoiding this pitfall while preserving the time-and-place specificity which is such a part of my creative process is to begin quite literally with the place-name: I try to approach it as naively as anyone who hasn’t been there would, and begin to construct the poem’s meanings around the meanings suggested by the name itself. 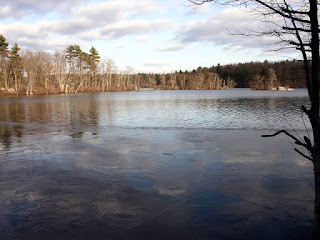 The poem ‘Echo Lake’ – a lake in my home town in Massachusetts and one of my favorite haunts when I’m visiting – begins and ends with the same image, and contains other images of subtle repetitions and expansions, so that the whole poem rings, very softly, with echoes: ‘Crows pass, // a slow communication.’ The poem is based upon a particular winter walk a few years back, when I spent a day rambling through the frozen woods around the half-frozen lake. But in writing the poem I tried to obliterate anything like specific detail in favour of the enigmatic and suggestive, inviting the reader to live a while in the scene, thinking their own thoughts, instead of merely passing through a description of someone else’s bygone. 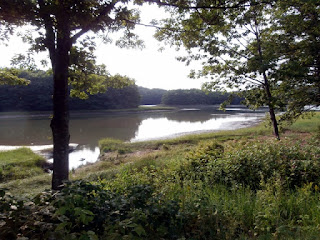 Pushing that metaleptic aspect of my imagery, keeping it strange but ultimately relatable, is a big part of my poetic effort these days. ‘Swimming at Ovens Mouth’ begins ‘The sun and moon / dawdle in the evening crowns’: for me those crowns are the black, jagged shapes of pine trees against an evening sky, but they could as easily be brightly colored sunset clouds, or the broad undulations of the horizon. The point is not what they refer to, but that the intelligence of the poem sees them as crowns: glittering symbols of power. Ovens Mouth is a stretch of tidal creek in Maine, and, if I’m being honest, my wife (to whom the poem is addressed) never swam there: she swam a mile or two away up the rather boringly named Back River. But ‘Ovens Mouth’, suggesting an entrance to where things are made and unmade, the edge of some enormous rawness, was too beautiful a name to pass by in the interest of mere historical accuracy. 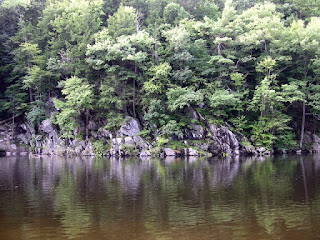 Maybe I’m always on the lookout for resonant place names. An hour we spent swimming with friends in a stretch of the Deerfield River called Stillwater, not far above its confluence with the Connecticut River in Western Massachusetts, was memorable mostly for being cold and tiring. But I knew the name was a potential opening into meaning. The water does look still, with no ruffles and few swirls, but the moment you launch yourself bodily into it a powerful current begins towing you away. The physical experience of being in that water, in light of the place-name’s optimistic lie, suggested all sorts of things about human resentment of time and death.

So although ‘Swimming the Deerfield at Stillwater’ is built from a real memory, set in a real place and full of real people, it is, I hope, essentially an unfolding of the strangeness that we should name a stretch of moving river Stillwater.