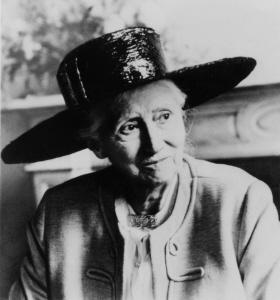 Marianne Moore disliking it.
Welcome to 'Our readers write', where we throw out a question related to poetry and ask readers to jump up and catch it. Got a question you'd like answered? Drop it in the comments section for use in the near future.

Reading over the introduction to New Poetries V and thinking about canons and contributions, who for you is an important poet with a small oeuvre?

Dan Burt: I take your question [w]ho for you is an important poet with a small oeuvre to mean, a dead poet to whom I return regularly. They are: Ransom and Snodgrass (Americans); Housman and Eliot (English).

Julith Jedamus: I would choose Bishop and Larkin: both perfectionists, both intensely private and self-censoring. Bishop published, if I recall correctly, seventy-eight poems in her lifetime; Larkin’s output, during the ten-year gestation of High Windows, was reckoned to be two-and-a-half poems per year. It is hard, in both cases, not to wish for more—and yet we have their prose (her travels, his jazz), their letters, and, controversially, their notebooks. How glad I am for his crossed-out cul-de-sacs, and tracks gone cold or stale; and her snatches of description (‘begonias ghostly in a galvanized bucket’) and rejected titles, her lists of possible rhymes (imposture/imposter) and musings on her art. In the unfinished essay ‘Writing Poetry Is an Unnatural Act’ she wrote that the qualities she admired most in the poems she liked best were ‘Accuracy, Spontaneity, and Mystery.’ Ah, yes....

Evan Jones: The question strikes me as very Modernist: Eliot published sixty-six poems, Marianne Moore seventy-one. But it brings to mind immediately a little-known Canadian-America poet, Joan Murray (1917-1942), whose work was published posthumously in one slim book, selected by Auden for the Yale Younger Poets Competition in 1947. For John Ashbery, she is 'one of the poets of the forties I most enjoy rereading'.

Rory Waterman: Well, there are many obvious choices, for all sorts of reasons: Wilfred Owen, Philip Larkin, A. E. Housman. But where would we be without the remarkable and tiny oeuvre of Ian Hamilton? No poet has squeezed so much out of so little. And whilst I'm on the subject, our perpetually back-patting generation (of poets, critics, magazines) would benefit equally from taking note of his editorship and his incisive criticism, as well as his catholic tastes.
Posted by EJ at 08:14